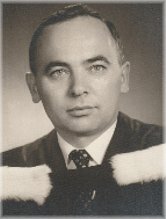 ROMACH, Mykhailo - It is with great sadness that we announce the passing of Mykhailo Romach on September 13, 2019, in Toronto, at the age of 94.

Michael was born on January 18, 1925 in the village of Luchyntsi, Ukraine. He completed his first year of medical school at Lviv University in 1944 but was unable to conclude his studies because of the war.

He married Olha Isak in England in 1951 and they emigrated to Canada that year. They had one daughter. He completed a Bachelor of Arts with distinction (College Gold Medal) and a Master of Arts degree in Chemistry at the University of Toronto. He worked as Head of the pharmaceutical laboratory in the Health Protection Branch, Government of Canada for over 30 years.

During his entire life in Canada, he was a committed activist and volunteer in the Ukrainian-Canadian community. His leadership skills were valued as President of the Ukrainian National Federation, first in the Toronto Branch and later at the National Office.

He will be remembered by all who knew and worked with him for his quiet dedication, hard work and honourable nature.

Visitation will be held at Cardinal Funeral Home, Annette Chapel, Toronto from 6-9 pm on Tuesday September 17, 2019 with a Panakhyda at 7:30 pm. Funeral mass will be at the Ukrainian Catholic Church of the Holy Protection of the Mother of God, 30 Leeds St. (Ossington and Bloor Sts.), Toronto on Wednesday, September 18, 2019 at 10:00 am followed by interment.