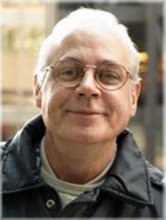 Steve said his final goodbye after a brief but intense battle with cancer.

He was a proud Torontonian, but was always quick to pick up on even a hint of anti-Toronto sentiment, which he would defuse with the reassurance that, actually, he was born in St. Catharines!

He spent much of his working life on the technical side of sports television, and was an avid hockey, baseball and basketball fan.

But Steve was a complicated guy – let there be no mistake about that. He did not suffer fools gladly, loved a heated argument, swore like a sailor, and was persuasive and articulate in achieving outcomes that suited his needs.

He was also a very private person, who kept to himself much of the time, so much so that he was only recently reunited after several decades with his five sisters, who have had the great joy of rallying around him and rediscovering his complicated and delightful persona during his illness.

This too brief interval with him has now become a highlight in the family history.

Steve requested that a fond and grateful farewell be extended on his behalf to those friends, colleagues and associates who reached out and connected with him during his illness.

He also asked that thanks be extended to his outstanding caregiving teams at both North York General Hospital and Bridgepoint Palliative Care.

In keeping with Steve's wishes, there will be no formal memorial service. He asks that you round up your own group of loved ones and friends, raise a glass, and tell funny stories that may or may not be about him.