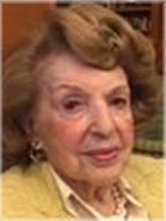 Beloved wife of the late Ben.

Loving mother and mother-in-law of Deborah and Frank Lambert, and Julia and Alan Wenger.

Dear sister and sister-in-law of the late Louis and Judy Zbarsky, Maita and Mack Kaufman, and Freida and Lester Hirshberg.

Devoted grandmother of Susan and Mike, Joanna and Daniel, Elissa and Jonathan, and Naomi and Nick.

At Benjamin's Park Memorial Chapel, for service on Monday, September 23, 2019 at 4:00 p.m. Interment to follow in Montreal.

Memorial donations may be made to the Ben Berenbaum Parkinson Memorial Fund c/o The Jewish General Hospita.