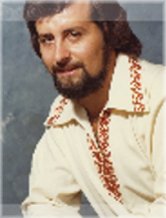 PRUS, Bohdan - After living a life filled with joy and happiness within a loving family and dear circle of friends, he was diagnosed with esophageal cancer in November 2018. After a difficult year of treatment and setbacks, he gently and peacefully passed away November 6, 2019, with his beloved wife of 40 years Iryna by his side.

He was born March 12, 1953 to parents Maria and the late Wasyl Prus in Manchester, England. The Prus family arrived by boat at Pier 21 in Halifax aboard the ship Scythia in mid-January of 1954 when he was only nine months old.

He lived a very active life within the Ukrainian community, participating in many activities, most notably with the Prometheus Men’s Choir and CYM (Ukrainian Youth Association), where he developed many lasting friendships.

His precious and much beloved daughters Kassandra and Roxoliana (Jordan) along with his granddaughter Hazel Maria were a constant source of strength, smiles, and encouragement throughout his illness.

In deep sorrow he is survived by his mother Maria; older brother Wasyl (the late Nadia) and his children Ihor and Irka (Peter and children Adriana and Chrystyna); older sister Ljuba (Yurij) and her children Taïsa and Oleksander (Alla and children Solomia and Maksym); and his younger brother Oleh (Marusia).

The family would like to acknowledge the ongoing and wonderfully amazing care of the doctors and nursing staff in the Thoracic Surgery department at the Toronto General Hospital, University Health Network. Visitation will be held at Cardinal Funeral Home, Annette Chapel, Toronto on November 11, 2019 from 2:00 PM - 4:00 and 6:00 PM - 8:00. The service will take place All Saints of Ukraine Chapel, 1280 Dundas St. W., Oakville ON on November 12, 2019 at 10:00 AM

In lieu of flowers, a memorial page has been created for him at Click To Donate as part of the Toronto General & Western Hospital Foundation and the funds will be specifically gifted to the Thoracic Surgery Department where he spent three months after his major surgery. He will be greatly missed.