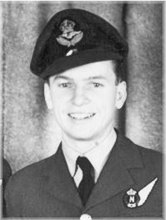 RIDLEY, Kenneth David  -  Passed away peacefully, with his son David at his side, in Brockville on Wednesday, November 6, 2019 at the age of 98.

Ken was predeceased by his wife of 63 years Barbara Green and his second wife Victoria McTavish.

Ken was born in Innerkip, Ontario in 1921, the son of George Hilliard Ridley and Mary Kerr Hotson.

He was predeceased by his brothers Alexander and Cecil and his sisters Eileen and Marjorie.

He was an RCAF veteran of WWII, 514 Squadron, serving as a navigator in an Avro Lancaster.

After the war he returned to Fleet aircraft in Fort Erie before joining Canada Customs where he worked until his retirement. He is survived by his sons David (Kathie), Garth (Heather), his daughter Patricia and grandson Blair. He will be missed by his many nieces and nephews, in particular Mike Greenhill (Cheryl).

A memorial service for Ken will take place at the Rosedale Retirement Residence, Brockville on Tuesday, November 26, 2019 at 10:30 a.m.

Ken will be buried at a later date in Oakville, where he lived for over 50 years.

Donations to the Canadian Guide Dogs for the Blind or Wounded Warriors Canada would be appreciated.