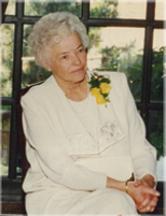 Merelie was born and grew up in Montreal, the daughter of Stanley and Grace Cayford.  She attended Westmount High School and McGill University, graduating with degrees in Science and Physical Education. At McGill she was elected President of the Women’s Athletic Association and later President of all women students. Upon graduation in 1946 she became a teacher in Physical Education with the Montreal School Board.  In 1947 she married Rev. Leonard Griffith and moved with him to Grimsby where he was minister of Trinity United Church.

Merelie met Leonard at her home church, St. Andrew’s Westmount, where he was Student Assistant to the Minister.  At his invitation she took charge of the Beginners’ Department in the Sunday School, and played the role of an angel in the Christmas Nativity Play.  After the dress rehearsal he impulsively asked her if she would like to go to a movie with him, and she impulsively accepted. That was the beginning of a love that lasted for the rest of their lives – and beyond. Leonard called her his “pearl of great price.”

Merelie found fulfillment sharing actively in her husband’s ministry. In Ottawa, as in Grimsby, she cared for the people of the parish, knew them by name, attended their meetings and received them as guests into her home.  At The City Temple in London, England she was Leonard’s source of healing and strength during that very taxing ministry.  When the family returned to Canada after six years in Britain, Merelie taught Biology for 15 years in inner city Toronto schools.

After their retirement, Merelie and Leonard escorted group tours to many parts of the world. They did volunteer work for the Red Cross and Dorothy Ley Hospice. They enrolled in adult education courses. Their chief delight was their summer home on Bay Lake near Bancroft where their grandchildren came to stay with them.  Each had a special place in Merelie’s heart.

There will be a Memorial Service of Thanksgiving to God for a life lived and the hope of life to come. It will be held at St. Paul’s Bloor Street Church, on Wednesday, December 11th at 11:00 a.m. A reception will follow in the Great Hall.

In lieu of flowers, the family would appreciate donations either to the Heritage Fund of St. Paul’s Bloor Street Church, 227 Bloor Street East, Toronto, or the Dorothy Ley Hospice, 220 Sherway Drive, Toronto.