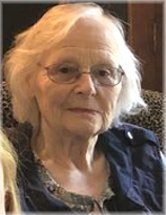 Gertrud leaves behind a legacy in her life and in her family. She is survived by her daughters Katrin, Trudy (Glen), Monica (Peter) and Brigitta of Toronto; and her son Christian (Carol) of Halifax.

She was sadly predeceased by her beloved daughter Martina.

She was a proud “Omi” to her cherished grandchildren; grandsons Julian, Olafr, and Theodore, and grand-daughters Emily, Lucie, Hana and Sydney.

Gertrud has many dear and lifelong friends made throughout her years spent in Germany, New Brunswick (Norton and Hammond River), Toronto, as well as all around the world. Gertrud will be missed by everyone who knew her; and will be remembered by those closest to her as strong and independent, but compassionate and generous to everyone, friends and strangers alike.

Gertrud was born on March 31, 1932 in Glogau, Germany, and spent her childhood years in Munich, Germany as well as Vienna, Austria. After completing her schooling, she apprenticed and trained at a horticultural college in Munich where she attained her horticultural certification. She worked in the gardens of Munich for several years, including in the renowned gardens of the Nymphenburg Palace.

In 1958 at the age of 26, she made the decision to immigrate to Canada. She settled for a few years in Toronto, but moved soon afterwards to New Brunswick where there was an opportunity to start a greenhouse and nursery business. The family spent eight years in Norton, before settling in Hammond River. Gertrud worked hard and tirelessly in the family nursery business she built (“Schmidt's Garden and Flower Centre"), while at the same time raising her six young children as a single parent. She was well known locally by plant lovers for her green thumb, her vast plant knowledge, and for dispensing sage gardening advice.

During the summer season, the family would spend long hours working in the family nursery business; visiting friends would often chip in and help as well. Gertrud continued to work and live in Hammond River until her retirement, at which time she returned to her beloved Munich.

She would spend six months of the year in Munich; and the rest of the year in Toronto with her daughters (with trips back to NB to the home she had known so long, to visit friends).

Gertrud loved showing off her apartment in Munich and sharing Munich with everyone. She loved having visitors. She was thrilled that four of her grandchildren were able to visit her in Munich over the past few years and able to spend time getting to know the Munich and the Germany she loved.

Gertrud had many passions. She loved music, having learned during her childhood in Vienna to play the piano. Many friends will remember festive events with Gertrud playing the piano or the accordion and her children singing German Christmas carols.

Gertrud was an avid skier and taught all of her children to ski. During the winter months, the Schmidt family would head for the ski hills of Poley Mountain in Sussex almost every weekend. Gertrud skied until she was 77, and in the summer she swam in the lakes of Munich until she was 85.

Gertrud loved flowers and gardening, and exploring the gardens of Europe and the world. Her children have inherited her love of gardening. She had an immense passion for travelling, visiting both new and familiar places. In the early years, her children would accompany her. After retirement, she embraced her love of travelling. Retirement did not slow her down at all; she continued travelling with friends and on her own, usually staying in youth hostels. She travelled far and wide. Wherever she went, she met new friends and renewed old acquaintances. No one was a stranger. Gertrud will be greatly missed by all.

A private service for family and friends will be held at the Humphrey Funeral Home, Toronto, on Thursday, December 19th. Cremation and private family interment will follow.