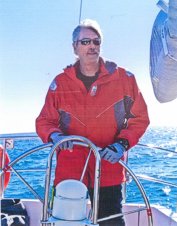 Michael died at Scarborough General Hospital with wife, Lisa, and brother, Patrick, at his side.

Michael immigrated to Toronto with his family from Great Britain in May of 1953, and worked for almost 40 years at the Bank of Nova Scotia. He retired four years ago from his post as Unit Leader of the Special Account Centre to indulge his love of sailing, toy collecting and to spend time with his beloved Golden Retriever Maggie, who will miss him terribly.

Larger than life in stature as well and personality, Michael will be greatly missed by friends from his banking days, fellow toy collectors and all sailors, including members of Ashbridges Bay Yacht Club. Michael spent many happy days at ABYC racing boats, including Spectra, Starwatch KC1, and Bad Whiskey, with Patrick and a wonderful crew. His fitness plan in the off-season saw him performing “work party duties as assigned” at the club, where his contributions will be missed.

The family wisesh to extend heartfelt thanks to the staff at the Scarborough Health Network General Hospital for their care and attention, in particular Doctors Ray Guo, Sydney Wong, Neil Orzech and ICU nurse, Julie Rupert.

In lieu of flowers, the family requests that a donation be made to the charity of your choice.

Services for Michael will be held on Saturday, January 25th at the Giffen-Mack Funeral Home, 4115 Lawrence Avenue East, Scarborough, Ontario. Visitation to take place from 11 a.m. to 1 p.m. with a celebration of Michael’s life to follow at 1 p.m.