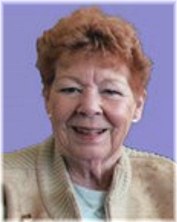 With heavy hearts we are saddened to announce the peaceful passing of Hazel Browning in her 85th year.

She is survived by her sons Mark (Victoria) and Alexander and her grandsons Peter and Christian all residents of California, also her sister Mildred Merrithew and her sisters-in-law Sandie (Sandy) and Betty (George) and numerous nieces and nephews in the Toronto area.

She was predeceased by her husband Hilbert K. (Pete) Browning in 1974.

Hazel flew high and wide in her career with TWA before settling in California to raise her family.

After Pete died, she worked hard at a multitude of jobs to raise her sons as a single mom.

At the end of her career she retired from a rewarding position with Sysco and she returned to Canada to enjoy her retirement with her two sisters.

She left many good friends in California who will miss her dearly also.

A celebration of Hazel's life will be held at Richview Baptist Church at 105 Clement Road, Etobicoke, Saturday, January 25th at 11:00 a.m. Cremation has already taken place .