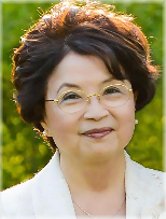 CHIANG, Maria Susan - Quietly slipped the surly bonds of this earth on February 14, 2020 in the loving presence of her daughters.

She was a faithful wife to David.

Maria was born in Fuzhou and grew up in Shanghai, China. After fleeing to Hong Kong during the cultural revolution, she attended St. Paul’s Co-Educational College where she formed many enduring friendships. In 1971 she emigrated to Canada and met David quite by chance on an inter-city bus; they were instantly smitten.

After marriage they settled in Toronto where Maria studied for a B.Sc. Honours at the University of Toronto, Woodsworth College. She bore two daughters with whom she was exceptionally close.

In later life, her passion for painting saw her return to complete a major in visual arts at U of T and she travelled widely, particularly in Asia. She had a knack for creating instant and lasting bonds with people from all walks of life and nationalities. She was proud to be a Canadian and embraced the liberal idealism of her adopted homeland whilst retaining a deep connection with Chinese culture, especially its food.

She had an inordinate love of seafood which she attributed to her coastal Fuzhounese birth. Her hallmark was a lively and playful sense of humour and we all sorely miss the girlish timbre of her giggle which bubbled up frequently thanks to the many joys, large and small, she found in life.

The family would like to thank CAMH and Markham Stouffville Hospital, and to express deep gratitude to Yee Hong Centre for Geriatric Care where she received dedicated and sensitive support during the last four years.

The family will receive friends at the Humphrey Funeral Home A.W. Miles – Newbigging Chapel, Toronto from 4 until 7 p.m. on Friday, February 21. A private family funeral and burial will take place the next day followed by a celebration of life in September.

In lieu of flowers, memorial gifts to CAMH or SKETCH Working Arts would be appreciated.