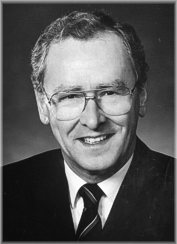 Thomas Richard Davies passed away peacefully at Christie Gardens, on May 18, 2020, after a life well-lived. He was born on Christmas Eve, Deember 24, 1931, in Ponoka, Alberta.

The son of a United Church Minister, Richard grew up in the depths of the Great Depression, that would forever define his character.

An early passion for jazz music led him to become a accomplished saxophone player and earn his living as a professional musician in the years after the war.

His father's sudden illness, however, forced him to leave music behind and take a job with The Bank of Toronto, as a junior clerk.

A fortuitous decision, as Richard spent his entire career with The TD Bank, rising to the position of Senior Vice President.

Richard often said that the luckiest day of his life was when he met Thelma Clayton at a church luncheon in 1951. They were married soon afterwards and spent a long and happy life together, having two sons, Clayton and Paul. In later years, Richard served on the boards of Nelvana, The Ontario Club, The CAA, St. John's Rehab Hospital, Canadian Urban Properties, and The Arthritis Society.

Richard's greatest pleasure in life, though, was being the patriarch of his family, and doting on his many grandchildren.

Richard was a 50-year member and past master of Harry L Martyn Lodge, and a 33rd degree member of the Scottish Rite and former treasurer of the Grand Lodge of Canada.

Richard was predeceased by his wife, Thelma (2018). He will long be remembered as a loving father to Clayton (Jo), Paul (Ellen), grandfather to Eric, Sean (Eunji), Peter (Katie), Marion and Tommy Davies, and great-grandfather to Hannah (Peter and Katie).

He leaves behind his brother Leigh (Joan). Because of Richard's lifelong commitment to public service and charity, his family would ask that you consider a donation to The United Way in his memory.

The family wishes to especially thank Maria Benigno, and also Elsa Isidro, Anne De Jesus-Payumo and the staff at Christie Gardens, for their devotion to Richard's care.

A memorial service to celebrate Richard's long life will be announced at a future date.