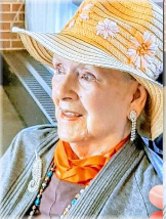 Proudly born and raised in the stunning rural community of Gilmour, Ontario, Mardy was the 3rd eldest in a family of 18 children - with many a charming adventurous family story to tell!  She joined the Royal Canadian Airforce (RCAF) in the early 1950's where she studied telecommunications, and later went on to work in senior administrative positions in government and business in both Ottawa and Toronto.

Mardy surrounded herself with books, art, and collectibles. She had a deep love of the water and spent many of her later years on Lake Ontario in a houseboat docked in Mimico, where she also explored the water in her yellow paddle boat. Mardy was fiercely independent, tasteful, sensitive, intuitive, and beautifully generous.

The incredible gifts she gathered at her little places over a year to present to loved ones at Christmas will never be forgotten for their intimacy, magic, and thoughtfulness. Her devoted life long friend, and husband, John Shea, referred to her as the most intelligent woman he had ever met (and meant it!). She was incomparable and memorable in every regard.

Mardy is survived by her two daughters, Tracy and Colleen, who are eternally grateful to have spent many hours of each day throughout the week, singing and reading to their mother, as they held her close.

Mardy is also survived by two grandchildren, who she adored, Landon and Allysha, as well as many loving siblings, nephews, nieces, cousins, and friends.

The family expresses a very special thank you to the incredible staff at Belmont House who made the last years for Mardy so very wonderful and grand.

Mother, we will cherish our two years in the garden forever. We love you so much. We miss you so much.

A special memorial is being planned and will be announced at a later time.