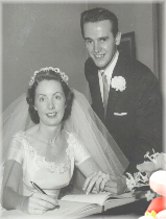 He was the husband of Sheila, age 89, who predeceased him on Monday, October 21, 2019, at North York General Hospital.

Gordon was born in Montreal, Quebec on August 28, 1932. He was the son of James Terrance Irwin Lynn and Dorothy Louise Sanders.  He was employed at Crown Cork & Seal Canada in Sales for 37 years, retiring in 1991.

LYNN Sheila Lynn (Alexander) - Was born in Toronto, Ontario on August 23, 1930. She was the youngest daughter of Aaron Alexander and Annie Lawson.  She was employed at the Ontario Ministry of Transportation as an Assistant to the Executive for many years, retiring in 1996.

Gordon and Sheila were married on October 4, 1958 at St. Michael and All Angels Church in Toronto.

They are survived by Gordon's sister, Jean Bourke and their only grandchild, Daniel Dean Lynn.

They were predeceased by their only son David Gordon Alexander Lynn.

Memorial donations in lieu of flowers may be made to your charity of choice.