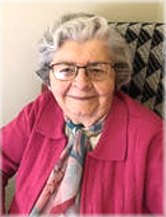 Marion and her sister Ruth grew up in the Christian home of Ernest and Edith Hunt in the small village of Gormley (present day York Region).

In 1944 Marion fulfilled a childhood dream by entering and graduating from the School of Nursing at Toronto General Hospital.

While working as a specialized nurse she completed further education (1949) with a degree in Bible training from Emmanuel Bible College in Kitchener.

Marion and Willis left Canada that year for Nigeria where they labored as a missionary team over the next twenty plus years. The contrast of life in Ontario to rather stark living conditions of West Africa could not have more pronounced for a rather shy girl from Gormley. Marion learned the Nupe language; helping translate Bible courses while running medical dispensaries and leprosy clinics first at Mokwa and later at Share. Marion loved the Nupe people and it was reciprocated.

Within a span of nine years Marion and Willis gave birth to five children; Bryan (Judy), the late Patricia, Edith (Mark) Chester, Garth (Pilar) and Mary all were born in Nigeria.

Towards the end of two decades in Nigeria Marion’s time focused less on hands on medical care and more on teaching nutrition, hygiene, and Christian education at the Ilorin Theological College.

The family returned to Canada in 1969. While

Willis pastored churches in Kitchener and Elmira Marion was drawn into leadership roles with the Woman’s Missionary Society. Over a span of twelve years Marion served as President at local, district, national and international levels.

Marion weathered the heartache of losing her daughter, Patricia, to cancer (March 2003) and her husband, Willis, age 88 (August 2009).

In retirement Marion enjoyed friendships forged on two continents including a large circle of family; twelve grandchildren, 14 great grandchildren. Marion and Willis lived in a retirement home in Kitchener. After the passing of her husband, Marion spent three precious years with family (daughter Edith) in North Bay and most recently made her home at Bethany Manor in Markham, Unionville. This past March, she celebrated her 96th birthday.

Marion is remembered as a gracious, gentle, kind and extraordinarily nonjudgmental woman that lived each day of her life for the glory of Jesus Christ.