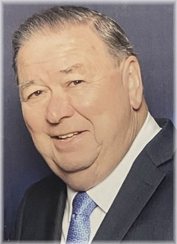 During WWII, he survived enemy bombing with only two broken legs and an arm while his mother and sister were both killed.

This incident helped define Bert's life, particularly his faith and his drive to succeed.

Bert is survived by his wife and best friend, Liz; two sons, David (Pauline) of Oakville and John of Milton.

He was the proud grandfather of Lauren, Regan, Shannon and Travis.

He was predeceased by his father Andrew Chalmers, his mother May Tait Chalmers and sisters Evelyn and Norma. Bert came to Canada in 1951 with his widowed father.

At first they lived with relatives but soon established their own home.

It was challenging but always happy.

When his dad remarried, Bert acquired a step-mother to whom he was devoted for the rest of her life. Work was important to Bert. As a teen he worked part-time in a supermarket and at Christie's Biscuits. He graduated from Lakeshore Teachers' College, Queen's University and OISE, University of Toronto.

Church continued to be important where he served in many capacities. He had a talent for making people feel included and was able to make people feel special in a sincere way.

He was a great story teller with a good sense of humour.

Bert provided counsel and a different point of view in a kindly manner.

Bert had a strong faith that in his death he would be reunited with his family and will wait for Liz to join him.

Donations may be made to the Meaford Hospital Foundation or a charity of your choice. No flowers please.