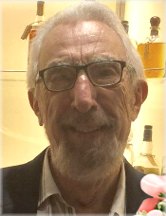 BARBER, Paul - Passed away peacefully on Thursday, June 24, 2020 in his 79th year. The symptoms of lung cancer only became apparent recently, too late for treatment so his passing was mercifully quick. He was made comfortable in his last two weeks at Bridgepoint Hospital, where his wife Jackie had been on the staff until her retirement; we thank the hospital staff for their help and kindness.

Son of John and Pat Barber, Paul grew up in southern England with his elder siblings Larry, Lesley (Jo to the close family), and younger brother Stephen.

He was interested in science and technology, and found work in the emerging computer industry. He emigrated to Toronto in 1968 where he was recruited by IBM and remained for the rest of his working life.

He married Jackie soon after arriving in Toronto and had forty years of happy marriage until losing her to cancer in 2011.

Jackie was all the world to him, and he felt her loss deeply.

Paul always tried to cause no trouble to others, so in accordance with his wishes the cremation has already taken place and ashes scattered with those of his beloved wife Jackie.