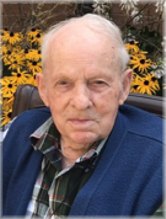 REESOR, John CLarence - Of Stouffville ON, passed away peacefully on Tuesday, August 4, 2020 at the age of 96.

John was born to Carl and Annie Wideman Reesor in Markham Township on April 11, 1924. John’s first language was Pennsylvania German and he spent his early years on the family farm milking cows, raising poultry and growing potatoes and turnips.

John was an active member of the Mennonite Church.

As a Conscientious Objector during WW2 he spent the war years on the farm helping to provide food for a hungry nation.

In 1948 he crossed the Atlantic on a Red Cross ship carrying horses to Gdansk, Poland. The devastation that he witnessed there led him to be a life-long advocate for peace.

After returning from Poland, John married Anna Heise on Oct. 11, 1949. Together they raised five children on their own farm near their parents and many family members.  John had a long and varied career in agriculture; he kept a herd of dairy cattle, raised crops, sold Pioneer seeds and imported farm equipment from the US. Anna was an important partner on the farm, helping with the milking, looking after the garden, canning and freezing produce, and raising the family.

John was unwaveringly dedicated to his church, family and community and invariably found ways to make productive use of his time. John and Anna were active members of the Brethren in Christ (BIC) Church and always found another church home if a BIC church was not nearby. After leaving the farm, he and Anna took the opportunity to be of service to their churches, and volunteered at Mennonite Central Committee (MCC) in Akron PA and at their BIC church camp in Magenetawan, ON. After leaving the camp, they built their retirement home on Ahmic Lake and made many lasting friendships in the area. He and Anna also spent significant time helping with their young grand-children in Markham, Peterborough, Waterloo and Calgary.

After moving to Parkview Village in Stouffville, they continued their volunteer service for many years at the Care and Share Shoppe, the MCC Stouffville thrift store. John was happy to be near his son Jay’s farm and drove tractors and helped with repairs at Reesor Farm Market.  In his later years he enjoyed wood-working, gardening, reading, and writing in his journals. In recent months he found great satisfaction in a new hobby—colouring.

John leaves behind his brother Kenneth, sisters Marie, Evelyn, Nancy and Kathryn and many nieces, nephews and friends. He is preceded in death by his siblings Cecil, Marion, Elmer, and Harold.

There will be a private family internment; arrangements for a celebration of life will be announced at a later date.

Mennonite Central Committee was one of John’s favourite charities.

In lieu of flowers, any memorial donations you may wish to make to that organization (donate.mcccanada.ca) or to the charity of your choice, would be much appreciated.