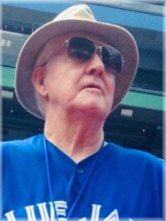 BOLAND, Charles Edward 'Chuck' - Passed away peacefully, surrounded by his family on August 4, 2020. He was 84 years of age.

Chuck was born in Toronto’s Cabbagetown neighbourhood in 1936 to parents James and Elizabeth (nee Reardon) Boland. He is remembered by his sister Catherine Dickson. Chuck is preceded in death by his late brothers Edward, David and James.

In 1959 he married the love of his life, Mary and together they raised their family in Scarborough, ON. Chuck centred his life around his family and his faith. He was an active member and volunteer within the St. Rose of Lima Catholic Church community. In his youth Chuck was a talented athlete and volunteered many hours as an adult coaching house league hockey and little league softball in his community.

After a long and successful career in the printing industry, Chuck and Mary retired to the town of Cobourg, ON. For many years they hosted family and friends and spent wonderful days walking along the beach. During this time Chuck was a dedicated member of the Knights of Columbus. They later moved to Pickering, ON to be closer to family and spend more time with their grandchildren.

Chuck will be remembered for his sense of humour, his devotion to his family and friends, and for his love of baseball, especially his beloved Blue Jays. Oh…Big Time!

In lieu of flowers the family request donations in his memory to the Salvation Army (salvationarmy.ca), an organization that was close to Chuck’s heart from an early age.