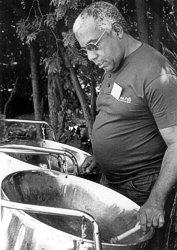 OLIVER, Gerald Arnim - It is with great sadness that we announce the passing of Mr. Gerald Arnim Oliver, who made his transition on the 4th of August, 2020 at 11:30 am.

He was born in Port of Spain, Trinidad to parents Rose Taylor and Eric Oliver on February 14th, 1934.

He started playing the steel pan at a very early age and during the years became one of the early founding members of The Silver Start Steel Orchestra. Years after in 1979 he had the opportunity to travel to Wales to play the steel pan with his church group.

In 1988 he was invited to play in Canada for the World Council of Churches.

Apart from music he was a very skilled soccer player in his youth and won a number of awards for his athletic abilities. He migrated to Canada in 1996 and eventually became a member of the Knights of Columbus Scarborough Council. Gerald served and played the steel pan at St. Barnabas church were he was loved and well known.

He will be greatly missed.