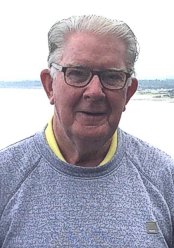 O'HALLORAN, Brendan John - (1931 - 2020) - Brendan John O'Halloran passed peacefully at Sunnybrook Health Sciences Centre on August 12, 2020 with his daughter and son by his side.

Beloved husband of Mary Ellen for 58 years until her passing in 2015.

He is survived by his daughter Catherine, grandchildren Mary Kathleen and Conor and son in law Alessandro, all of Toronto, as well as son Brendan and daughter in law Lorraine of Naples, Florida and grandchildren Grace of Charlotte, North Carolina and Aidan of Williamsburg, Virginia.

Brendan also leaves behind siblings Olivia of Cavan, Ireland and Maurice of Dublin, Ireland. He was predeceased by his sister Sadie and his brother Patrick, both from Dublin.

Brendan was born on February 3, 1931 in Dublin, Ireland in the shadow of Croke Park, the home of the Gaelic Athletic Association. Brendan worked in sales at Switzers department store of Dublin, the city where he met his future wife, Mary Ellen Kerrigan of Ballina, Mayo. They moved to Toronto in 1957 and were married the same year at St. Basil's Church.

Brendan spent his entire career at Eaton’s Department Store and retired at the age of 60. His first priority was always his family, their health and their education. He and Mary sent Catherine to The University of Toronto and Osgoode Hall Law School. Brendan was graduated from Princeton University and Harvard Business School.

In retirement, Mary and Brendan traveled extensively with their children. He loved anywhere with an ocean breeze and spent many happy days on Cape Cod, Bermuda, Georgian Bay, Florida, California, as well as trips to Boston, New York City, Chicago and many vacations back home to Ireland.

He will be remembered for his kind wit and sense of humour, keen intellect, a charming way with those from all walks of life and, most importantly, his dedication to family and his faith in God. His friendships with all of his grandchildren were deep and impactful. He honoured his wife’s wishes to pass in her own home in a demonstration of nursing, compassion, and love that extended four, often difficult, years. Brendan never wavered from his promise and did so with a patience, compassion, devotion and a gentleness that taught his family everything it knows about love.

Brendan created a life for himself, his wife, his children and his grandchildren that is remarkable in its fullness, love and faith.

A Mass of Christian Burial will be held at Canadian Martyrs Church, 522 Plains Road, Toronto on Friday, August 14th at 10 am. All are welcome but the family understands the need to be cautious in these times and wishes all of Brendan’s friends to place their health above attendance.

To view the service through the webcasting service of Paul O'Connor funeral home, please visit this link at the time of the service https://distantlink.com/SCION13.html