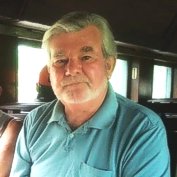 After years of micro-strokes which had taken a toll on Dad's memory, he was diagnosed with vascular dementia and had spent the last year charming the staff and residents of Woodhall Park Care Community. Being only a few kilometres from his wife of 49 years, Norma, they would spend much of each day together, reading the paper, talking, napping, going for walks and of course, watching golf.

When Covid tragically prevented them from being together in person, Rab and Norma talked daily on the phone, and weekly with his children James and Laura and other dear friends.

Though Rab's memory for names and places had gone, it never stopped his love for discussing current events, history, the weather, about his grandchildren, the comings and goings at Woodhall and the many fond memories of his adventures with colleagues and friends from years gone by. His concern for his family, his sense of responsibility their care and protection remained utmost to him until the end.

Rab, known as Bob at work, was extremely proud of his professional accomplishments, having spent 25 years defending the rights and safety of Canadian workers with his beloved colleagues at Labour Canada.

Rab is survived by his wife Norma, his children James (Kimberly Lau), Laura (Ian Boreyko), Paul Crookshanks (Linda Crookshanks), his grandchildren Iris, Hannah, Calum and Louisa, his sister Mary and his brother Ian, as well as his many dearly beloved nieces, nephews and extended family in Canada and Scotland.

He was preceded in death by his parents Jenny and James Gass and his brothers Jimmy and Bill and his darling sister Jean.