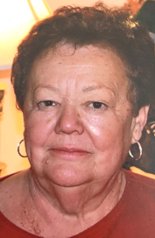 Linda was born in 1940 in Toronto to Jack (John) and Betty (Rebecca), and grew up in the Eglinton West area. Her dad worked for the TTC and was a lifelong union member. Two generations later, Linda’s son Michael is now a proud TTC employee.

Linda worked for several companies after she finished school, including Confederation Life where she met Joan Morton and Linda Hainer. That group of friends was how she was introduced to Dave in the early 60’s. Dave and Linda got married on November 11, 1964. Their first apartment was in Thorncliffe Park, East York, and then they moved to the family home in Scarborough in June 1968, which they still live in today. Soon outnumbered by the men in her house, Linda would spend the next 50+ years keeping them all in line.

Linda was an explorer. She enjoyed travelling to new places and being active outdoors in all seasons. Early on, Dave and Linda camped and canoed through parks like Algonquin and Outlet Beach (now Sandbanks) and skied in Ontario and Quebec. That love of outdoor exploring was passed on to the boys as the family travelled to many campgrounds in Canada and the US for summer vacations.

After the boys grew up, Dave and Linda enjoyed travelling to Europe, Hawaii and the Caribbean, as well as a few cruises. They remained avid campers for many years, too. As members of the Starcraft Camping Club group, they would travel each summer to the Annual Rally in various location across North America. Linda often spoke about their camping memories and their wonderful camping friends. Sometimes, when the boys couldn’t get in touch with Linda on her cell, it was because she and Dave had taken off for a weekend getaway, most likely to Niagara with their friends for camping and a casino visit.

Linda liked to golf, too. She and Dave would take the clubs along with them on the camping trips to get a round in when they could. For a few years running, she had a weekly game with friends at a local course. She also enjoyed going to the local theatre with another set of friends.

Linda was also a ferocious cribbage and euchre champion. She and Dave would take no prisoners during card tournaments and liked to take money from people when playing at the Legion each week.

The incredible number of activities and friendships Linda and Dave have made over the years are evidence of their positive attitude and love of laughter. Linda was the heart of the family, hosting many holidays and birthdays in their backyard. At Christmastime, she would do an incredible amount of baking, and everyone loved when she brought plates and plates of treats out for dessert. Linda’s shortbread and almond bars were her most popular baked goods, and it was an expectation that each family would take home a large container of their own after the gathering.

Linda was a regular fixture at her grandchildren’s events (hockey, lacrosse, basketball, soccer, karate) and could be easily spotted in the crowd of spectators by her bright blue coat. She would celebrate their effort afterwards, win or lose, and always had a bag of treats ready in her purse, sometimes for her grandkids' friends too. Linda knew the numbers and names of all the players on each grandchild’s team and had a master schedule of where and when each grandchild’s activity was each weekend to maximize the number of events she and Dave could attend. She was connected to Team Snap and had the games in her iCalendar schedule; Linda was a very technologically-adaptable Grandma who worked at keeping up with all her grandchildren’s activities.

Linda met her cancer diagnosis head on, with incredible courage, and Dave never left her side.

Linda will be buried at Mount Pleasant Cemetery in Toronto, near her parents and other family members. A private family service will be held on Tuesday, August 18th.

In lieu of flowers, please consider a donation to the Canadian Cancer Society. Arrangements with Ogden funeral home, Scarborough.