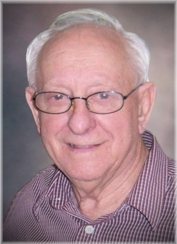 And so the adventure ends, Willie Bartlett, a.k.a. Snidley Wiplash, has gone to be reunited with his loving wife, Ada.

After arriving early into this world, a priest was immediately summoned and his parents were told this baby was not going to make it through the night...in true Willie fashion, he chose a different day 99 years later on August 9, 2020.

Willie's family immigrated to Toronto when he was a young boy. When he became of age, he was a proud member of the Sherbrooke Fusiliers and fought overseas.

At the end of the war, he returned home with an honorable discharge that stated he was "a small wiry man with above average intelligence".

After being stood up by his date, he went roller skating at the Mutual Street Arena, where he met his true love Ada Ford. They were married six weeks later on September 18, 1945, and shared 71 happy years together. By 1958, Willie and Ada had built their own home and were the parents of 5 children, Dannie, Bev, Karl, Robin and Terri.

Everyone who met Willie will remember his fondness for laughter, silly jokes and a good prank. This attribute does not end with his passing, but will live on in his children (5), grandchildren (15) and great-grandchildren (22).

"Come on let's all go" was one of Willie"s favorite sayings. But alas, he will be taking this adventure alone, until he meets up with Ada, who will fix his collar and ask "What took you so long?" Take care Dad, until we meet again, you will always be our sunshine.

There will be a Graveside Service on Saturday, August 22, 2020, at Resthaven Memorial Gardens.