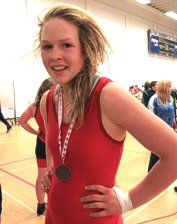 Little Holly: Dead and Gone. 1.5x a person but champion of everything small. A great soul with little time to waste.

Babysitter, Baker, Bike-Breaker Extraordinaire, Inventor of the Bready-bear, and feared nemesis of all bicycle chains and carrots. Eater of all the plums on the tree. Fierce Competitor in hand soccer, pioneer of the knee-tilt in women’s wrestling, and ready to talk back to her coach in the middle of the match.

She moved through life with determination, though she felt the same fear as the rest of us, and maybe she felt everything more strongly.

A competitive soul who loved and encouraged her competitors. Proudly intolerant of bullies of all kinds. Brave enough to fail if she wanted to try something new – to try now even if asked to wait, to try even if she didn’t know how. She became accomplished through her failure while the rest of us were waiting, and inspired us all to try.

A sensitive little girl with no time to put up with your shit. She loved the world and left her mark on it, and the scars of her love remain on our hearts.

She saw Death standing at my shoulder and laughed at us both.

Memorial events are planned for Hamilton and Calgary on the 26th of September and October 3rd respectively. The memorial in Calgary will be small but streamed – so we don’t all get Covid19 and die.

In lieu of flowers, please consider a donation to the 541 Cafe and Eatery in Hamilton, or a charity of your choice.