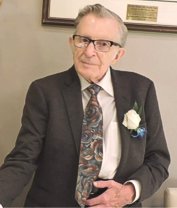 Son of the late Richard and Ethel Patterson of Wakeham, Quebec. Brother to Wesley (of Branford) and Gwen Holmes (of Williams Lake, BC). Uncle to several nieces and nephews.

Survived by his wife Judy (nee Coull) of 53 years. Predeceased by his beloved daughter, Heather; his brother, Benjamin; sister in law, Evelyn “Lyn” Patterson; and brother in law, Ralph Holmes.

Larry was born and raised on the Gaspe coast, served several years in the armed forces, lived in Montreal and New Richmond, Quebec before making his home in Toronto, Ontario.

If desired, in lieu of flowers donations may be made to a charity of your choice.