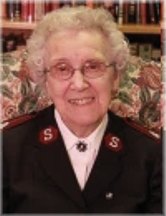 MCMILLAN, Major Dorothy Christina - Born in Brantford, ON to Charles and Christina Uden, on May 3, 1922, was Promoted to Glory on October 17, 2020, from Toronto ON.

Before Dorothy was one year old, the family moved to Flint, Michigan, USA. After graduating from High School, Dorothy worked for General Motors (Chevrolet Division).

In her early twenties, she moved to Canada and entered The Salvation Army Training College. Upon her commissioning as an officer, in 1948, as a member of the King’s Messengers Session, she was appointed to the Greenwood (Toronto Corps).

Appointments followed to East Toronto (GECO Outpost), Tweed, Campbellford and then to the THQ Property Department.

Dorothy was always a very active officer in every appointment and even in retirement took on leadership of a large “Over 60 Club” in Scarborough, and was the Home League Special Events Chairperson in Clearwater, USA. She and Donald also took on Post-Retirement appointments to serve as Corps Officers in Essex, cover the furloughs of officers in the Red Shield Services in Germany and Projects Work in the Brazil Territory, for a few months in each appointment.

In lieu of flowers, donations can be made to The Salvation Army Scarborough Citadel.