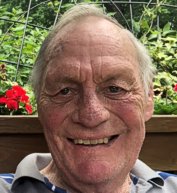 Howard was a gregarious man who wanted to experience all life has to offer - and he did exactly that! Farmer, teacher, horse trainer, printer, sub-contractor - friend, husband, dad, grandad, confidant, advisor.

He was a remarkable man who loved people and who left a lasting impression on everyone who met him- and he met everyone! On a cruise with his family, as he walked through the ship with grandkids in tow, and after hearing many, many, many times, “hi Howard’, good morning Howard, how are things today Howard,” one of the kids remarked, “does everyone on this ship know you grandpa?”

He will always be adored by his 2 favourite “girls” and 3 amazing grandkids who will continue to try to meet his expectations as they continue their journey through life - thoughtful and intelligent answers to his often probing questions, use of the best vocabulary possible, a sense of humour and lots of laughter (joke telling being a particular speciality) and never giving up as they travel through the ups and downs of life.

A man of a million stories, he wove his experiences and thoughts into these stories, often embellished by a relevant country and western song that he thought helped make the point. He would reference his experiences as a boy growing up with his brother and sister on the farm and how they shaped him into the man he became. A truly compassionate man who did not shy away when friends or relatives were facing difficult health issues. A man of high principles who would not waver from these principles. An intelligent man who was not a fighter, but one who would walk away from a situation that compromised these principles. An active man who enjoyed playing squash into his 70s, he always said you can tell a lot about someone by how they are on the squash court. His squash buddies will be reminiscing about his annoying ability to always know exactly where the ball was going and then play the best shot he could to frustrate his opponents. He was so proud when he played squash with the light of his life, his daughter as his partner, always holding their own on the court with “the boys”. His lessons were racquet up, eye on the ball , move up to the T and never give up – you can always come back even from 14-0. Howard’s philosophy on life!

He totally supported his wife’s career offering his insights and thoughts to the challenges implicit in this career. And this 52 year partnership was full, loving, combative at times, and never boring. At his daughter’s wedding, in his speech welcoming his son-in-law into the family, he looked directly at the bride and groom and delivered one of his famous Howardisms: “I’m not going to tell you not to have fights, go ahead. But never go to bed angry. In our house, this is how it works. After a fight, one of us says I’m sorry… and Sheila says its ok.” The other – Sheila’s favourite - "If Sheila wants it … then Howard needs it."

He was a man with a smile for everyone. He’ll be with us in his own way forever. As Sheila always said to him. “You’re a good man Charlie Brown.” Keep checking up on us and make sure you tell us when we mess up. See ya soon. All our love.

One thing Sheila wanted was a perennial garden at Toronto Botanical Gardens. Instead of cut flowers dying, we've set up a fund to maintain and grow this garden. If you would like to pay tribute to Howard we prefer contribution to this amazing space: https://41120.thankyou4caring.org/sslpage.aspx?pid=298

Arrangements with Paul O'Connor funeral home, Scarborough. The family will be having a service in the future and will be announced at a later date.