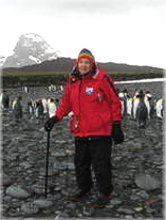 Predeceased by her husband of 50 years, George Donald (Don), her sister, Marilu Campbell and her brother, Garnet McCandless.

Pat was born in Hamilton, but her family lived throughout the United States before settling back in Canada. Her father and brother bought a car dealership in Owen Sound and her family moved there while she was still in high school.

She met Don Nicol (after a set up by their mothers) and, after she graduated from MacDonald Hall in Guelph, they married in 1952. They moved to Toronto and, when Don bought his first pharmacy, they bought a house in the west end. They raised their family there until 1971 when they bought a pharmacy on the main street in Owen Sound. Eventually they moved out to Balmy Beach.

After Don’s death Pat travelled to the Canadian north and, with her children and grandchildren, to destinations as diverse as Antarctica, the RCMP Heritage Centre in Regina, Wickaninnish Inn on Vancouver Island, New England, Paris, Manitoulin Island and Labrador.

Our thanks to Julianne, and to the wonderful staff at Lee Manor, Third Floor North, for their kind, compassionate and professional care.

At Pat’s request there will be no service.

As an expression of sympathy, the family would appreciate donations to the Owen Sound Regional Hospital Foundation, The Lion’s Foundation of Canada Dog Guides, or a charity of your choice.