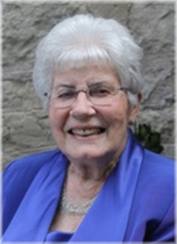 KEARNEY, Norma Fay (nee ROSEBRUGH)   - Norma passed away peacefully at Amica Peel Village on October 22, 2020, at the age of 93, with family by her side.

Norma had a long and successful career as a social worker, most recently with Peel Childrens' Aid Society.

She continued with private adoption practice after her retirement and into her 80's! Norma was intelligent, compassionate and generous.

Her actions spoke to a deep love of family and friends.

After over 50 years in Wildfield, Norma and Bob moved to Rosedale Village in Brampton, until after Bob's passing. Norma moved into Amica in 2019, enjoying new friends and activities. She will be sadly missed by the many people whose lives she touched.

Arrangements with Dods & McNair Funeral Home, Orangeville.  Funeral Mass at St. John the Evangelist Catholic Church, 16066 The Gore Road, Caledon, on Friday, October 30, 2020 at 11:00 a.m.  Norma will be interred in Wildfield, at a later date.

Donations can be made to Bethell Hospice Foundation, McMaster University or Princess Margaret Hospital Foundation.