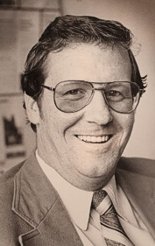 Ron Wallace, a prominent former Aurora politician and newspaper publisher, died November 22, 2020. He was 76. His wife Patricia was by his side.

Ron is survived by his daughter, Professor Aurora Wallace (Paris, France) of whom he was extremely proud; and his sister Brenda (Bunny) Rennette and her family (St. Catharines, Ontario). Fondly remembered by his first wife, Lois (Armstrong) Wallace.

Ron was predeceased by his life partner, Rosemary Schumaker; his parents, Alvin and Ann Wallace; and his brother-in-law, Gwendon Rennette.

Ron was born and raised in North Bay, Ontario. He studied journalism at Ryerson in Toronto and was the editor of the Daily Ryersonian. A life-long lover of newspapers, Ron’s first newspaper job was as a copy boy at The Toronto Star, where he was responsible for taking news from the teletype machine. He believed that this job made him the first person in Canada to hear that JFK had been shot. Ron was Editor at several newspapers including the Aurora Banner, The Richmond Hill Liberal, and the Etobicoke Guardian before founding his own paper, The Auroran, in 2000.

Following in his father’s boots, he joined the Aurora Fire Department as a volunteer in 1981, since he was already accustomed to going to fires to cover them for the paper. After the town bookstore burned down, he and Rosemary opened the R&R Book Bar in 1985, a beloved spot in town to discuss politics with Ron over a terrible cup of coffee.

Ron was a three-term Councillor for the Town of Aurora; a Trustee for the York Region Board of Education and a board member of the Aurora Historical Society, the Aurora Cemetery Board, and the Chamber of Commerce. His legacy will endure through the Aurora Street Festival, Operation Puck-shy, his work as a Rotarian, supporter of the Royal Canadian Legion Branch 385 and as a generous champion of countless local events and organizations. His many contributions to Aurora have been recognized by the Rotary Club’s Paul Harris Fellow Award, the Citizen of the Year Award (2013), and the Queen’s Diamond Jubilee Medal (2012).

An avid and fearless skier and hockey player, a voracious reader and prolific writer, Ron also enjoyed travelling, collecting, and holding court wherever he was. His storytelling will be greatly missed.

It was Ron’s wish that expressions of sympathy be made to the Aurora Rotary Club or the Aurora Historical Society.

Arrangements with Thompson funeral home. There will be a private graveside service followed by a Celebration of Life at a later date.