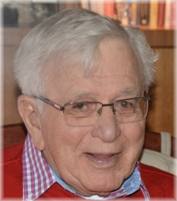 CHRISTIE, Robert Arthur  -  It is with great sadness that the family of Robert (Bob) Christie announces his passing on January 22, 2021, at the age of 93.

Robert will be lovingly remembered for his cheerful spirit and was happiest when surrounded by his family.

Robert will be sadly missed by his sons, Ronald Christie and David Christie.

In lieu of flowers, donations can be made to the Ian Anderson House Hospice.