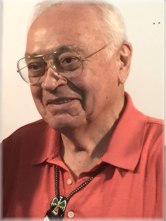 Loved dearly by the McCourt family.

Predeceased by his sister Lillian, his chum.

George spent his childhood enjoying the outdoors of Falconbridge and the surrounding area. He had fond memories of skating on (and sometimes falling through) frozen lakes, tobogganing by candlelight, hunting in the bush with his bow and arrow, and stealing pies off window sills with his childhood friends. He had a very nurturing upbringing and came from humble roots.

George was a proud member of the Toronto Maple Leaf Hockey Club. All he ever wanted to do was wear the Maple Leaf on his chest. The “Chief” treasured memories with his teammates and was proud to play 21 seasons in the NHL and win 4 Stanley Cups by their side. The family would like to extend their gratitude to Brendan Shanahan and the entire Toronto Maple Leafs organization for their incredible support and tribute to his legacy.

In the off-season George was happiest tending to the wood stove at his camp with his wife and children. His camp was a special place where George could enjoy privacy and share years of laughter and cherished moments with his family and friends. His family was his pride and joy. He was particularly proud of his First Nations mother and to come from Indigenous ancestry. He was honoured to be one of the first Indigenous players in the NHL.

George’s ability to spread laughter to others will be dearly missed. He had a way of making the people around him feel very special. He led strongly by example, believing that hard work would get you somewhere and was stubbornly modest in spite of all his great accomplishments. “I guess I was a lot better than I thought I was,” he would say.

George will be remembered by many for his natural gift to tell stories. He will live on gracefully forever in ours. Dad, Grampa, Chum, George… you will be missed!

He will be remembered at a private family service, which is just the way George wanted it.

The family wishes to thank the staff at Michael Garron Hospital.

Donations may be made in his memory to True Davidson Acres through https://donations.toronto.ca/s/?program=7013f0000000ezzAAA.