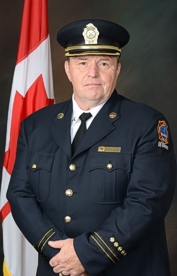 SHERWOOD, Glenn - It is with great sadness that the family of Glenn Sherwood announces his passing February 20th, 2021 at the age of 59.

Glenn passed peacefully surrounded by his wife and two sons after a lengthy battle with cancer.

Glenn enjoyed a long career as a firefighter with the City of Toronto Fire Service, ascending to the position of Acting Platoon Chief.

Glenn will be lovingly remembered by his wife of 39 years, Kristy; sons Kevin and his wife Heather, Kristofer and his partner Konica; grandchildren, Shane and Andrew; his father Evan; brother Brian and his wife Susan; and numerous other family members and friends.

An interment, in Warkworth Cemetery will be announced by the family in the spring of 2021.

Glenn began a successful 36 year career in East York in 1984. He loved every aspect of the job and his firefighting family. Glenn managed to work in every borough of the city, moving up the ranks to become an Acting Platoon Chief before succumbing to esophageal cancer, February 20th, 2021. Glenn passed peacefully after a long battle at the age of 59.

Glenn had many passions. He played goalie with the Toronto Firefighters hockey league and the Toronto Old Timers League. Glenn also enjoyed “hunting” with his buddies which was more often than not just a chance to catch up with some longtime friends with a few drinks around a fire. Glenn loved to sail, go boating with friends, ride the ATV and run any piece of heavy equipment he could get his hands on.

Mostly, Glenn loved spending time with his sons and grandsons, inventing, playing and working together.

Glenn was widely known for his huge smile, large heart, wide shoulders, sense of humour and funny stories. He is remembered fondly by so many, on and off the job, please raise a toast in his honour.