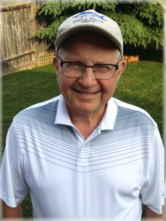 The first child of Harry and Lorna Cutler, Barry spent his infancy in his grandparents’ home while his father was still in active service in Europe.

It was not long before Barry was joined by his brother Nigel and then close to 14 years later by his sister Bonnie.

The bond between Barry and his siblings was never more evident than in his last days when he called regularly just to hear their voices.

The end of Barry’s life was marked with a life altering cancer diagnosis that brought with it some suffering, but also the opportunity for so many special moments of meaning and love.  Barry faced his illness with the same resolve and optimistic spirit that marked his work and home life.

Donations in Barry’s name can be made to Mount Sinai Sarcoma Clinic* and Wellspring (Brampton).

We love you and will miss you Dad, Barry.