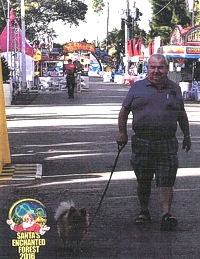 ZDEBIAK, Mieczyslaw 'Mike' Stanley - Mieczyslaw (Mike) Zdebiak, affectionately known as “Meester Mike," passed away on Saturday, February 20, 2021 in Toronto at the age of 77.

Also survived by his sister Irene Lipinski (Steve) and sister-in-law Glenna Zdebiak. He was a loving uncle to Ryan (Christine) and Matthew (Krystal) Zdebiak and Ashley and Gregory Lipinski. Great uncle to Hudson and Hailey Zdebiak.

Mike was born in Poland and came to Canada with his mother and brother on Christmas Eve 1956. Living in Toronto with his maternal Babcia and Dziadzio, he spent many a summer’s day at the CNE. Subsequently, as young teenagers Mike and Zeke had summer jobs working in the concession stands of the Outdoor Amusement Business legend Bert Murray. Mike realized that his calling was in the concession business. He soon found himself managing and operating Conklin Shows’ entire food operation.

In 1980, “Meester Mike” ventured out on his own. He was a great presence not only at the CNE but also Western Canada and the U.S. He instilled a strong work ethic in his employees which in turn saw loyal patrons return year after year to his stands in order to enjoy some of the most innovative carnival food available.

Mike’s infectious smile, generosity and caring have endeared him in the hearts of many (including his beloved four-legged companion Fluffy). His presence at fairs and exhibitions throughout North America will be missed.

As per Mike’s wishes, cremation has taken place. To keep everyone safe during this COVID crisis, there will be no visitation and a private family service and Interment will be held at a later date. Arrangements entrusted with Giffen-Mack funeral home, Danforth chapel.

If desired, memorial donations can be made to Princess Margaret Hospital Cancer Foundation.