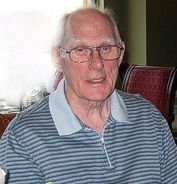 VAUGHAN, Peter David - It is with deep sadness we announce the passing of Peter David Vaughan after a courageous battle with cancer. Peter passed away peacefully in the early hours of April 3rd, 2021, just shy of his 88th birthday.

He leaves behind his wife of 60 years Joy, his son David, daughter Sandra, daughter-in-law Carol Anne and two grandsons Andrew and Brandon.

Peter was born and raised in London, England, the youngest of six children - two older sisters Doris and Vera, and three older brothers: Roy, Allan and Raymond. He loved playing soccer and occasionally played for a semi-pro team in the UK.

During WWII, Peter was evacuated from London and lived with Mr. and Mrs. Kelly and their son Roger in Frome, Devon for five years. He became very close to the Kellys during that time, and Peter stayed in touch with them until their passing.

Peter immigrated to Canada in 1957, landing in Edmonton, Alberta. After landing a job at British American Oil Refinery, he was transferred to Vancouver. There he met and married Ena Joy Howard. His son, David was born in 1964 in Vancouver. Shortly after Peter, Joy and David moved to Oakville Ontario where Peter took a job in the Gulf Oil Testing Centre. In 1967, Sandra was born. The family would then go on to live in Sudbury, Fonthill, Ridgeville, Milton, Hornby and finally Ballantrae.

Peter retired from the oil business at age 57. He liked to stay active and continued to work, eventually becoming a Court Registrar in the Brampton Courthouse. He also did a short stint as a Limo Driver. After fighting against mandatory retirement for 10 years, Peter was able to go back to work at the age of 75 as a Court Services Officer in the Milton Courthouse. He was thrilled! And, in his spare time, he was a Marshall at a golf course, president of the Roadbuilders Association and the Hornby Improvement Association.

Peter was devoted to his family, and coached his son in hockey and his daughter in soccer. He was very fond of his two grandsons and enjoyed spending time with them. He loved to putter around their one acre home in Hornby. He was devoted to his wife, and was her primary caregiver when her health deteriorated.

A special thank-you to the medical staff at the Stronach Cancer Centre for the care they provided to him during his battle with cancer. Thanks to Kingsway Place Retirement Home for their care and support during his 5-month stay. And sincere thanks to the staff at Margaret Bahen Hospice for the excellent care and kindness they gave him and his family leading up to his passing. We were relieved to know he was so well cared for by everyone.

In lieu of flowers, please feel free to donate to the Cancer Society of Canada or the Margaret Bahen Hospice.

Due to Covid restrictions, we will have a small family service this Saturday, April 10th at 1:00pm. Expressions of sympathy may be shared to the family via Thompson funeral home, Aurora.