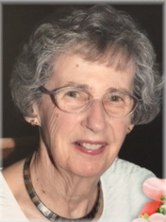 She will be dearly missed and remembered with much love by her many family and friends.

She is predeceased by her son Steven, who passed away in 2002.

Born and raised in Winnipeg, Hazel grew up in a large and closely-knit family.  She often reminisced about summers spent with her parents and six brothers and sisters at the family cottage at Matlock Beach.

She became a nurse and a stewardess, but after marrying Charles Hayles in 1954 she focused her life on raising her three sons.  Happiest when surrounded by family, Hazel will be remembered for her kindness, her sense of humor, her stoicism, and her understanding of and compassion for others.  She was an active community volunteer, and a long-time member of the congregation at Bayview United Church.

The family is grateful for the loving and caring attention that Hazel received from her caregivers Stacy and Renia, and from the staff at Amica Bayview Gardens.

A memorial will be held at a later date, after COVID-19 restrictions are lifted.

In memory of Hazel, donations can be made to Frontier College Foundation, The Nature Conservancy of Canada, or UNICEF Canada.