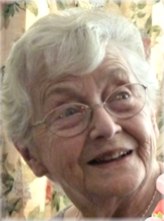 Only child of Dora Hummel Orchardson and Thomas Holman Orchardson; wife of John Sieber Campsie, who died in 2014.

After her father died when she was 10, she and her mother depended on each other.

She trained as a teacher and worked in a Vancouver school.

She met John Campsie after the war. They married in 1950 in England and lived in North Berwick, Scotland, for a year before settling in Toronto.

In the late 1970s, she returned to full-time work at what was then called the Ontario Crippled Children’s Centre, where she supervised recreation and life skills training for children under five, a job at which she excelled.

She and John retired in the 1980s, and for the next decade, they travelled widely.

She also enjoyed gardening at their house in Hoggs Hollow, and volunteering with the Friends of the Trinity College Library and the Out of the Cold program at St. Andrew’s Church.

The family would like to thank the Christie Gardens staff for their great kindness and affection toward her throughout her time there.

In lieu of flowers, please consider making a donation to the Christie Gardens Foundation.