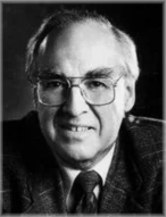 Though suffering from dementia, Bruce was being wonderfully cared for in the Veterans Centre at the Sunnybrook Health Sciences Centre in Toronto.

Bruce was born on May 20, 1925 in England and moved with his parents shortly thereafter to Montreal to live in Verdun.

His passion for theatre began as a young man.

After serving in the Royal Canadian Navy in WW2 on an active base in Newfoundland/Labrador, he continued his involvement in the arts, becoming active in the Montreal Repertory Theatre.

Bruce’s career spanned six decades and included leadership of CBC Radio, CBC English language programming and many years as an independent television and film producer and distributor. His son Donovan joined the family business in 1980 and worked with him over the next 14 years before branching off to find a career in Information Technology.

Bruce was pre-deceased by his wife Rita Raymond (nee Roy) and his brother Bob Elcox.

He is survived by his son Donovan (Nancy Lee Martin), his grand-daughter Gabrielle and his sister Doreen Elcox as well as nieces and nephews on multiple continents.

In honour of the excellent care he received as a resident of the Sunnybrook Veterans Centre, donations to the Sunnybrook Foundation in lieu of flowers are appreciated.