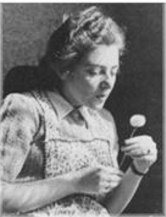 Passed away in Toronto at age 94 after a brief battle with COVID-19.

Born in Lodz, Poland, Henia, her mother and her sister were among the few survivors of the Holocaust from their large family. Together they rebuilt their lives, first in Belgium and then in Paris, where she met Nochem, her beloved husband of 59 years.

In 1951 Henia arrived in Canada, where she and Nochem built their family and lived for the rest of their lives.

Henia never shied away from sharing the experiences she had during the war, but she also did not let the trauma define her. She lived a full and expansive life until her passing.

Henia was a teacher in both profession and personality, educating all those around her from her deep well of life wisdom. For decades she was an adored Yiddish teacher at Bialik Hebrew Day School, instilling in her students a deep respect and knowledge of her beloved mother tongue.

She believed that each Jewish child had a Yiddish "box" in the back of their minds -- and it was her job to unlock it.

Henia leaves behind her daughter Adele (Barry), son Abe (Fern), her grandchildren Miriam-Simma (Michael), Mordecai, Ben, Shoshana (Logan), Leah, and Simcha (Honora), and great- grandchildren Nechama, Adira and Shia. She is predeceased by her sister Chava and her husband Nochem.

Services will be private, taking place on Sunday, June 6.

Donations in Henia's honor can be made to Toronto's Workmen's Circle https://bit.ly/3pqvsZz or the Humber River Hospital Foundation  https://www.hrhfoundation.ca/ .