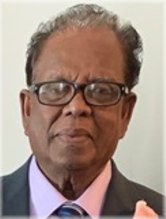 He was born in Jaffna, Sri-Lanka on March 13, 1934, to Elizabeth and Thio Santhio. He was the youngest of three children. He lost his mother at the age of seven and was brought up by his father, his older sister, Salettammah and his brother-in-law Dominic Mathews.

He started his primary school at St. James school and completed his JCSE at St. Patrick’s College. He pursued his higher education at St. Joseph’s College, Tiruchirappalli, India and graduated with B.Sc. in Botany and Zoology in 1959.

He completed his post graduate degree in education from University of Peradeniya, Kandy, Sri-Lanka in 1966.

He always considered teaching as his calling and was called to help with the growth of young people in their spirit, mind, and body. Throughout his career he has taught in Catholic schools.

We are sure his late son Dominic Savio and his late granddaughter Roshni are happy to welcome on the other side.