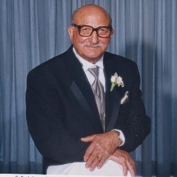 Salvatore was born in Calabria Italy. He was one of 9 children. At age 8, he was removed from school to help his parents work the farm. He was drafted to the army at the age of 22. That same year, 1952, he was married to Antonietta. Four years later they were blessed with a baby girl Mary.

In 1957, Salvatore made the brave move to venture to America having to leave his wife and daughter behind in order to find a better life for them. He travelled by ship and embarked at Ellis Island, New York. He further travelled to Toronto to meet up with his older brother Francesco.

After spending more than six months looking for work, he then decided to travel to Quebec and found work at the Canadian Gold Mines Company as a miner. In Quebec, he enjoyed fishing, hunting and gathering with friends.

Salvatore then called his wife and daughter to meet him in Canada. In 1959, Antoniette and Mary sailed to Nova Scotia and then trained to Quebec to join Salvatore. The family lived in Quebec until 1960 when they decided to return to Toronto once again.

In Toronto, Salvatore and Antonietta welcomed 2 boys, Joe and Tony to become a family of 5. Salvatore worked with his brother Francesco in construction until an injury prevented him from continuing in construction.

Salvatore found work at the foundry at American Standard where he worked as a fork lift operator.

After several years, he was able to purchase his own home. He planted a large vegetable garden and this brought him passion and brought him back to his roots. He loved working the land and taking care of his property.

Salvatore loved his family and friends. He was able to sponsor his wife’s parents, Domenico and Maria Tassone, and bring them to Canada from Italy.

In 1972, the family moved from Toronto to the suburbs of Weston. Salvatore was working for Primo Foods for the next 15 years until his retirement. In 1985, after retirement, Salvatore moved his family to Woodbridge to be closer to his brother Cosimo and his sister-in-law Maria, who was Antonietta’s sister.

Salvatore was a devote catholic of the Immaculate Conception Church in Woodbridge. He enjoyed spending his free time at the Social Club, playing cards and Bocce with his friends. He was an avid walker he enjoyed going for very long walks very early in the mornings. He never stopped working always keeping busy working on projects at home. He loved life and as he got older he would be heard saying “la vecchiaia e` brutta”

Salvatore is survived by his beloved wife Antonietta of 72 years of marriage, his children Mary (Tom), Joe (Carmela) and Tony, his grandchildren, Jessica (Adrian), Stephanie, Christopher, Sabrina, and his great grandchild, Alexander.

He was much loved and will be greatly missed.