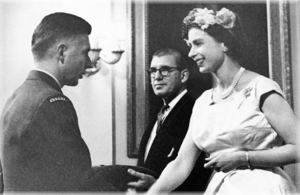 CARSWELL, Andrew Gordon   - He served his country as a pilot in war and peace.

He had been hospitalized after a fall and hip fracture in June.

Andy lived life to its fullest and served his country as a pilot in war and peace.

He was born in Bishop, California, in 1923. His Canadian parents returned to Toronto in his youth, to Balmy Beach where his grandparents were neighbours on Balsam Avenue.

He joined the RCAF in WWII and became a Lancaster bomber pilot at 19.

He was shot down in January 1943 and was a POW for the rest of the war at Stalag VIIIB in Lamsdorf, Silesia.

He escaped twice, once making it to Stettin on the Baltic. He studied architecture at University of Toronto after the war and met his beloved wife, Dorothy "Dot" McCreadie, at a dance in Toronto.

They were married in 1947 and lived together for 74 years until Andy's recent hospitalization.

Andy never lost his love of flying. He worked as an instructor at Central Airways while a student and then rejoined the RCAF in 1948.

He had an illustrious career as a RCAF pilot and was awarded the Air Force Cross for bravery by Queen Elizabeth for several daring rescues in British Columbia. Andy, his wife Dot and their five children moved frequently but returned to Toronto in the 1960s.

He became a Transport Canada Aviation Inspector after his retirement from the RCAF in 1970 and they lived on Wanless Avenue in North Toronto.

Andy was highly regarded as the Regional Air Safety Officer for Ontario and for his float plane expertise.

His lively talks and lectures were very popular and much appreciated by the Ontario aviation community.

After his second retirement in 1988, he and Dot moved to Washago, Ontario.

They travelled extensively and attended many WWII veterans' reunions. They very much enjoyed their cottage on Kahshe Lake in Muskoka. Andy wrote a book, "Over the Wire" about his wartime experiences, which was published by Wiley in 2011. He was very proud that it was in libraries across Canada.

Andy volunteered at the Sunnybrook Veterans Centre for many years after they moved back to North Toronto and their Condo on Wanless Avenue in 2002.

He often pushed wheelchairs for veterans often much younger than him.

Andy is survived by his wife Dorothy; daughter Anne and husband Ian of Victoria and their daughters Skye, Hayley and Sheena; his daughter Marg of Kamloops passed away in 2017 of breast cancer and is survived by her husband Ross, their sons Peter, Vincent and daughter Christina; son Jim and wife Marika of Mississauga and his son Christopher; son John and wife Kim of Richmond Hill and their children Rachael, Colin and Natalie; and son Tim of Toronto.

Andy and Dot have 12 great-grandchildren and many nieces and nephews.

Andy lived a full life. He was very glad to spend his final days at the Sunnybrook Veterans Centre where he had volunteered. They took amazing care of Andy for which his family will be forever grateful.

There will be a small family ceremony at a date to be determined.

Donations can be directed to the Andy Carswell Veterans House for homeless veterans in Ottawa and/or the Sunnybrook Foundation in support of the Veterans Centre.