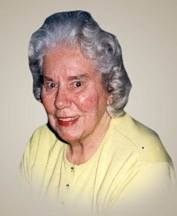 Better known as “Betty," she was predeceased by her loving husband, Richard de Nottbeck.

She leaves behind her daughters, Christine and Jay de Nottbeck, her son-in-law Mark Cripps, and her grandchildren; Kate de Nottbeck and, Tim and Michael Cripps, along with their wives Krista Dennison and Robyn Hayward, respectively. Betty was pleased to have met her great-grandchild, Taron Cripps.

Herself the eldest of 8 children, Betty has two surviving sisters, Millie and Maud. Her siblings, Ken, Claude, Doris, Kathy, and Rene have predeceased her.

Born and raised in Toronto, when she was first out of the nest, Betty and two of her sisters rented a home on Toronto Island. Going to work on the ferry was a daily treat. She met and married her husband on the Island. Richard (Dick) had a short stint working as a milkman after returning home from the war. In their early years together, weekend dancing at the Palais Royale was a regular part of their lives. Betty became a long-time employee of the Bank of Nova Scotia, working as a branch secretary both in Toronto and Scarborough locations.

Betty and Dick had many enjoyable summers at their trailer on Balsam Lake. Fishing was their favourite pastime. She was an avid reader and armchair traveler. She often watched travel shows to see the world from the comfort of her living room. This past year, she enjoyed the popular series, “The Crown”, and “Outlander”. The latter was of particular interest as she was of Scottish descent.

For the final 9 months of her life, Betty was lovingly cared for by Jay and Kate. They introduced her to Facetime and the Internet; often having a laugh together enjoying posts within that latter platform.

Betty will be interred at Brampton Memorial Gardens in the company of immediate family. Arrangements entrusted with Scott funeral home, Brampton chapel.

In lieu of flowers, a donation in Betty’s name to your favourite charity would be greatly appreciated.