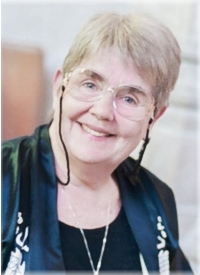 Born November 13, 1942 in Toronto, during a snowstorm with her twin brother Herbert "Herb" Taylor Barnes, who predeceased her, along with their loving parents Norah Elizabeth Barnes (née Hardy) and Herbert "Bert" Taylor Barnes, and her beloved grandson Albert Stephen Jucker-Kiddle.

Elizabeth made many lifelong friends at Branksome Hall, University College at the University of Toronto, and Columbia University, where she earned a Master of Social Work degree.

She met David while working for the Toronto Family Service Agency, and after building their home "Wildflower Way" together north of Milton, Ontario, worked at the Halton Family Services Agency, the Vanier Centre for Women, and at Maplehurst Correctional Centre and later served on the provincial parole board.

She believed intensely in rehabilitation, and was committed to social justice at home and globally. She was unfailingly generous to her family and friends, clients, and the many causes she supported.

A celebration of life will be held outdoors at the Milton Banquet and Conference Centre (3090 Steeles Ave. W.) at 2 p.m. on Saturday, August 21, 2021, followed by a champagne reception.

In lieu of flowers, donations can be made to the CNIB, which served Elizabeth's father Bert and grandson Albert, the scholarship she helped to endow in memory of Albert, or the Stephen Lewis Foundation's Grandmothers to Grandmothers Campaign.