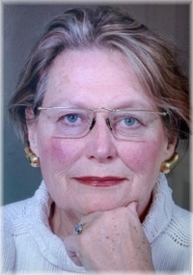 Barbara leaves behind many friends and relatives in Canada and the United States.

She had a strong connection with the Eastern Townships in Quebec, having moved to Knowlton (Lac Brome) with her husband Hugh who became the town doctor.

They forged many lifelong friendships there and it is where she shares a headstone with her late husband. She was an active member of the Federal and Provincial Liberal Parties, serving as riding president for both during the various election campaigns.

Barbara also volunteered her time and served on the board of the Housing Help Centre in Hamilton.

Barbara graduated from the University of Toronto in 1955 with a degree in physical and occupational therapy and continued to be involved with the school as president of the OT PT alumni association for a number of years.

In 1989, she received the Arbor Award from UofT for her years of voluntary service.

She also received an award of merit from Mohawk College for her dedication and service to the college.

She also enjoyed interacting with students as a tutor at the McMaster School of Rehab Science.

According to her wishes, cremation has taken place and a Celebration of Life will occur at a later date.

In lieu of flowers, memorial donations may be made to a charity of your choice.