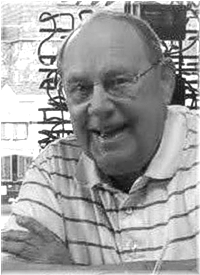 TITGEMEYER, Williams (Bill) E.  -  It is with sadness that the family of William (Bill) E. Titgemeyer (84) of Oakville, ON announces his passing on July 27, 2021, following complications from Lewy Body Dementia.

Believing there was no higher prize left to acquire from skiing, they married and happily never skied again. His youth was spent in Willoughby and Shaker Heights, Ohio and Savannah, GA.

After graduating from Savannah High School, he went on to Cornell University and then a career as a Certified Public Accountant.

As an adult he lived in Shaker Heights, OH; Barrington, IL; and Oakville, ON.

In retirement, he volunteered as a driver with WellSpring, was a member of Probus Club of Old Oakville, and enjoyed golf, bridge, and entertaining. Loving husband and proud father, Bill leaves behind his wife Patty of 56 years, sons John (wife Bonni) and David, in-laws Peggie Kelly Gould and Bob Gould, nieces and nephews.

He was preceded in death by his parents and in-laws (Ruth and Jack Kelly), and his brother Jim.

There will be a family service when Bill is buried in the family plot at Lake View Cemetery in Cleveland, OH at a later date.

Donations in his memory to The Alzheimer Society of Canada via https://alzheimer.ca/en or The Lewy Body Dementia Association via https:// www.lbda.org/donate/ in the USA would be appreciated.