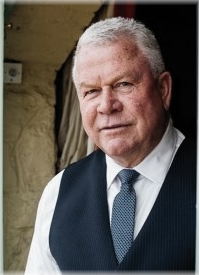 John will be lovingly remembered by his four children and their spouses, Julie, André (Lisa), Ashley (Aimee), Abbie (Barry) and his six grandchildren, Charlotte, Jack, Kieran, Poppy, Abigail and Josephine, as well as his four siblings Catrien, Paul, Mary and Peter, and an abundant circle of family and friends.

John was born in Hamilton, Ontario and predeceased by his parents Dorothy and John Rudolph Visser.

John lived a very full life and had countless adventures; whether it be on his motorcycle trips, airplane excursions, travels and story-telling, with his colourful presence through it all he was very proud of his children and grandchildren

Our family would like to thank the team at Hillsdale Estates in Oshawa for their exceptional care during his final chapter.

A celebration of life will be held at The Royal Canadian Legion, Branch 459 in Whitchurch-Stouffville, on Saturday, October 9th, between the hours of 12:30 and 5 p.m.

In lieu of flowers, donations in John's memory are welcome to The Royal Canadian Legion, Branch 459 in Whitchurch-Stouffville.