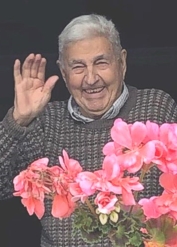 Di GIACOPO, Angelo - Angelo Di Giacopo passed away peacefully on Thursday July 29th, 2021 in the comfort of his home surrounded by his loyal wife, loving children and grandchildren.

Angelo was born in Garuffo di Campli, Italy on February 23, 1933 to Elizabeth (nee Malaspina) and Luigi Di Giacopo and was the last living sibling of 5 brothers and 4 sisters.

Married on July 28th, 1966 and immigrated to Canada on a cold day on October 22, 1966. Quickly finding employment at a restaurant which would continue in his love of entrepreneurship owning a restaurant in Venezuela, Italy, two in Brampton, and a motel in Fort Lauderdale, FL. His unabashed generosity offered many opportunities as a business owner and as a mentor.

Always selfless, compassionate and humble, treating everyone as his equal. With his super human work ethic, once saying to his wife, his only complaint was “God didn’t make the day long enough for me.”

Quiet natured and most content being in company with all his beloved friends and family. His heart lived in three countries, Canada, Florida and Italy. Making sure to return often with his family to reunite with his family and inlaws in Italy.

There wasn’t anything he couldn’t master and was resolute in all his endeavours. Having many passions and talents such as gardening, wine-making, cooking, traveling, bocce, playing the accordion and organ, listening to music, beach going, cards, and love of animals.

He always strived to make sure everyone was happy and in peace. Guided by his strong faith, and despite life’s hardships, he never burdened anyone with his struggles. “ Se ci sono pietre i fiori devono crescere.”

Terribly missed, he will be forever in our hearts.