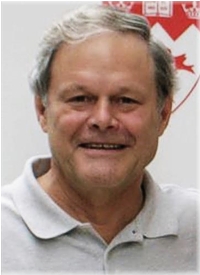 Bill was a loving husband, father, grandfather, brother and loyal friend to many.

His wife, Kilby (née Munro), was by his side for over 53 years of marriage and was a tremendous love and support throughout his recent illness.

His strong sense of values can be found in his children, Mackenzie (Dan) and Taylor (Leslie).

Bill was proud and cherished his grandchildren, Sierra, Blake, Cooper and Carmen. He will also be missed by his sister, Hope (Rod), brother, Rick (Laurie), and many nieces and nephews.

Bill was predeceased by his brother, Hal.

Bill was born in Calgary, Alberta in 1942, to loving parents, Margo and William Davison.

Growing up, he developed a lifelong passion for sports – one that quickly focused on football.

He created enduring friendships and boundless character at Father Murray's Notre Dame College, in Wilcox, Saskatchewan. While playing football for the Gee-Gees at the University of Ottawa, Bill would meet the love of his life, Kilby.

A forty-year career in banking created numerous friendships that endured beyond the corporate sphere. His fabulous sense of humour, combined with his imaginative, elaborate and spontaneous pranks, often kept those closest to him on their toes.

A wonderful storyteller, Bill enjoyed golfing, curling and socializing at the Donalda Club, years of backstopping his team at Wednesday night hockey, and summers with family on Allumette Island.

He spent countless hours cheering on his kids in all aspects of their lives and later the lives of his grandkids, too. A special thanks to all who helped care for Bill at Bridgepoint Health.

A Celebration of Life will take place at a later date.

If desired, donations may be made in his name to Make-A-Wish Canada or Right to Play Canada.